StuG G Platoon from the box set by Battlefront. Lovely models, one of my favourite armoured vehicles from the Second World War. They've been done for a while now, though I'm just getting to posting pictures of the completed thing now. 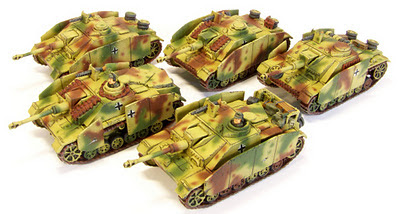 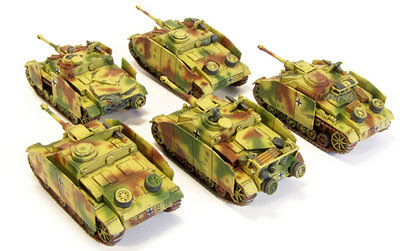 There is limited chipping, etc but it really doesn't show very well: I probaly shouldn't have bothered apart from the deeper scratches/penetrations on the side-skirts. Mostly, I'm still to afraid to screw thing ups completely, and unlike brush painting fixing major mistakes is a pain and very visible. 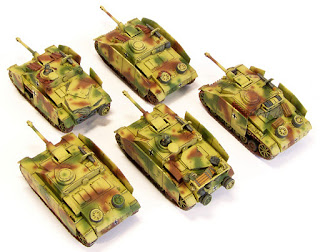 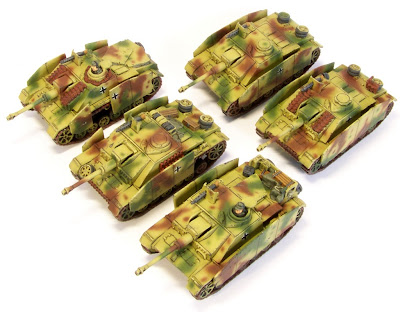 For paints, I used Vallejo Model Air Middlestone as a base, then a lighter version with some VMA Sand mixed in for highlights. Green camo is VMC Reflective Green, brown is VMC Flat Earth (= VMA Tank Brown), both used with Vallejo Airbrush Cleaner to thin. The spare track links show up very red in the pictures but aren't quite so bad in real life; still, I should make them stand out less. Lines and details picked-out with MiG Dark Wash, though I now prefer to mix my own with MiG oils.
Germans Crosses by Dom's decals: way better than Battlefront's ones: these at least are centered properly. I skipped any other marking as they're meant to be rather generic in use.

Considering that these represent vehicles No. 5-9 that I have airbrushed....ever...they didn't turn out too badly IMHO and I learn't quite a bit.
CdlT
Posted by Chevalier de la Terre at 12:28 8 comments:

Sikh Vickers MG gunners, two whole platoons worth. I did something a little different with the basing, more of an arid Italy theme, but not too dry, with scattered rocks and grass, etc. I didn't want to do a Cassino theme, more South Italy during the 1943-44 advance by the 8th Indian Division, or something like that. 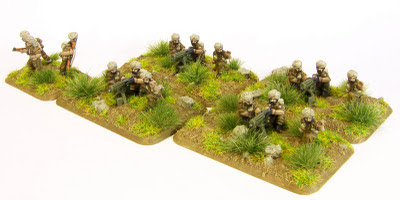 Two MMG Platoons plus a couple of extra command teams.

Another local tournament, fewer players than last time with several being "busy/working/chicken/the usual excuses" etc., which sadly left us with only 6 players on the day. Since we were there though, might as well get some games in.

...basically building out the one I used before at the June 5 Competition: I added the SP Anti-tank Platoon as I expected more heavy armour, though they are quite fragile. Another Cromwell & Firefly Troop would probably have been better, but I haven't painted it yet.

I haven't added pictures below but they are in an album HERE (my games have hoards of Cromwells swanning about, shouldn't be too hard to spot). This report is almost two weeks late, but I've had other things to do so better late than never.

Played on Table 1, modeled loosely on Battlefront's "Battle of the La Fiere Causway" with a few additions. Me attacking, I massed all but the 2ic and two HQ CS tanks on the left, the latter on the right to keep the infantry platoon in place. With 5 Platoons JC deployed a full-strength Lehr platoon on-table to my right, 3 Panthers in ambush (Lehr Panzergrenadier, 3.7cm AA and Nebelwerfers in Reserve). Oddly, no Kampfgruppe.

The Recce Troop made full use of their reconaissance deployment move, going 16" forward, then another 16" to basically be on the objective and preventing an ambush on the immediate hedgerow. Rifle Platoon doubled forward, Cromwells and the rest followed normally.

Not able to deploy on the hedgerow immediately behind the objective, JC deployed the Panthers behind it and drove up to it, firing at the Recce Troop but missing. The Panthers then "Stormtroopered" back from the hedgerow. In my bound (turn 2) the first Cromwell Troop pushed foward to make contact with the hedgerow the Panthers had recently pulled-back from, firing DF smoke at the beasts, while the Recce Troop held fire (Cautious Movement) and hugged the same hedgerow.

The next few turns saw reservs arrive for JC (Lehr Platoon, Nebelwerfers, 3.7cm AA) and the Panthers missing everything while Cromwells swarmed around the flank. A Firefly shot penetrated one but I failed FP, only to see it never remount and the rest of the Panther platoon get blown away the next turn. The infantry on JC's right stayed pinned for eternity, babysat by the 2ic and HQ CS tanks. Nebelwerfers and the 2nd infantry platoon soon followed the Panthers and I held the objective uncontested. 6-1 to me.

With one mobile platoon, Rudy deployed 2 Grenadiers, Black Pioneer, 3 PaK 40s, Mortars and 2 Tiger Is (Re-roll Misses!) in his quadrant. With 5 Platoons, I deployed a Crowell troop in each with the HQ and 2 CS tanks in the lower right-hand corner. The objective were in the centre (obviously) with a village for cover and numerous BF cover stone walls/barricades: perfect infantry defensive country almost taylor-made for this mission.

Rudy did the usualy move for the objective, the Tigers decided they wanted to tangle with 7 Troop and its Firefly, KO'd one tank and the 2iC before the Firefly put an end to them. Sad face. PaK 40s KO'd a tank from 8 Troop, but lost a Pak in return.

Turn 3 and lack of reserve was remedied as the Recce Troop, M10s and Infantry came on. Two M10s died the following turn to a fluke mortar bombardment (I rolld two 1s, he rolled two 6s for firepower) and the other two to long-range PaK 40 shots. 8 Troop had their revenge as they gunned-down the PaK 40 (turned too far, no gun shields and in the open), the rest of the army poured fire into the Pionerers who, after the usual "run out with flame-throwers" move found they could't get an assault in and did nothing but bail a few tanks. They soon broke under the wieght of fire from CS tanks, 7 Troop and the CinC, taking the German CO with them. My infantry were pinned by mmortars, never unpinned. 8 Troop meanwhile killed-off Grenadiers, the Mortars and the PaK 40 Command team, and with 5 Platoons out of six destroyed and no CO, the British held the field. 5-2 to me.

Defending, Ian deployed Grenadiers and 4 x StuGs on-table, Pioneers in ambush: Grenadiers, Mortars, mixed Panzer IV and Panzer III platoon off-table, and something else (scouts?). I started with 2 Cromwell Troops and the HQ, the rest in reserve.

Turn 4 and things are looking a bit iffy, still no reserves. 8 Troop manages to kill a Panzer IV, fends off an assault by Pioneers and then destroys them with the help of the HQ Troop. The Panzers are eventually mostly dealt with, though one and the last StuG survive. Turn 6 my first reserve platoon arrives while Ian has all of his: typical. An assault by the HQ troop pushes Grenadiers off an objective. Turn 7 and as I hold it, Ian tries to do some damage before assaulting with Grenadiers but his dice go cold (about time!), all shots miss and the Grenadiers decide staying put in an orchard is preferable to assaulting tanks. 5-2 to me.


Game 4: Breakthrough vs Charles (my brother) and his US Paras

I sent the M10s on the flank march/reserve, rest on-table. Took on his 57mm ATGs, little bugger passed 3 gun saves for 75mm hits though an MG hit at least got one. Return fire was largely ineffective thankfully. TOT by the Glider 105s killed a Cromwell and bailed 2 others and a Stuart. Tank fire followed by an infantry assault clerared the ATGs, after which we pushed on to the objective, MG'ing anything that moved. AOP and 105 fire proved annoying, but actually did very little after that first bombardment.

My Rifle platoon meanwhle had a decent assault into a Para Platoon in an orchard near the objective, putting them below half (they passed) before pulling back. 105 fire then put my infantry below half and killed a Stuart, though the infantry passed their 5+ morale...twice (Cheap Fearless!). M10s came on bound 5 or 6, were assaulted by Para Enginners, lost an M10, counter-attacked and killed a few, then lost another bailed and I decided continuing was unfavourable, so pulled out. The Airborned Engineers then breakthrough assauted onto 8 Troop (w/attached CS tanks) and killed 2 CS tanks, I pulled the rest back and in my bound assaulted and killed of the Enginners w/Para CO. 4 out of 6 dead US platoons with no CO and nothing near the objective to contest = 6-1 to me.

Terrible mission for fighting Cromwells with Infantry. Basically game saw me deploy heavinly on my right, use Recce troop and Recon move to get as far foward as possible, then push forward with Croms and Stuarts to MG anything in sight. By turn 3 is was all over, though Nick's P-47 manages a pair of tank kills, M10s another befor disengaging (away from the objective...) and Croms, HQ and Stuarts overwhelmed an infantry platoon and 57mm ATGs on the objective. 6-1 to me.


So, 28 Pts from 5 games...OK-ish, though I felt bad for running over everyone. Even the promised Tigers and Panthers did little as their users are still too inexperienced using them. Without wanting sounding like a braggart, playing a game where you win easily becomes tedious after a while and this is the situation I face at the moment: I like challenging games, win or lose. My enthusiasm for painting and the like has improved, but not so much for gaming at the moment. I can't really thing of any way to help except perhaps use less formidable armies and just keep on with the teaching? Any thoughts on the matter (i.e. teaching new-ish players) is of course appreciated.

Hopefully in 6-12 months the standard of play locally will improve, and hopefully the more experienced players will put more effort into attending events...you know who you are.