On Sunday, June 5th I attended a Flames of War tournament hosted at the local club, Warzone in Kensington. The period was Late War, 3 games, 1250 Pt armies on a 6 x 4 table using the Missions Encounter (booo!), Fighting Withdrawal and Breakthrough. A number of new players attended which was nice to see, though on the day only 8 players showed while the two regular Soviet-players were absent....rest assured, Comrade Stalin has been informed. Pick it up slackers!

Disclaimer: The events described below cannot be independently verified, except by me. Good enough.

Knowing beforehand that I would be helping out with rules questions and the like (a lot...), I took an army designed for quick, fun games where I would either win quickly or die quickly trying. In reality the entire event was more to get some games in with different players, not to be super-competitive. Thus 'B' Sqadron, 1 RTR took to the field for its first few games. I fielded a Cromwell Squadron out of Villers-Bocage (no Turning Tide yet) and went with:

I could have added an ARV, but I still need to get one. Wouldn't have used it anyway. 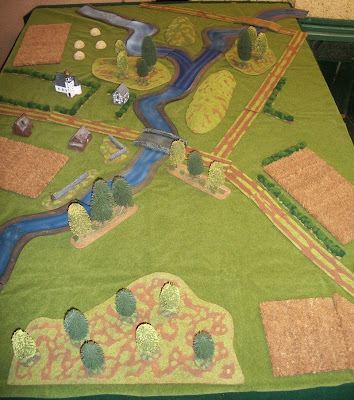 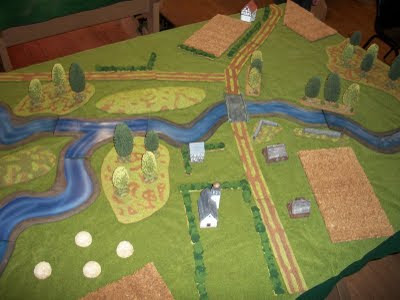 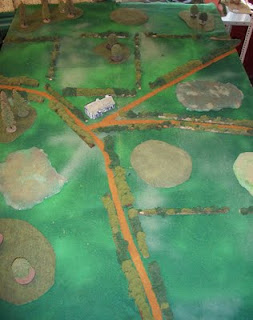 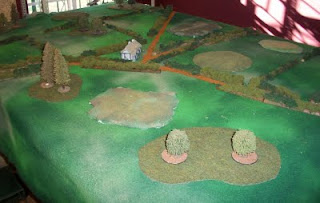 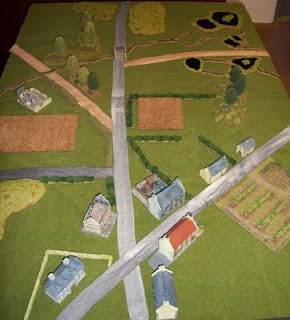 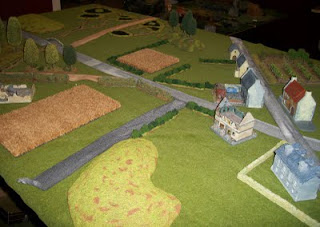 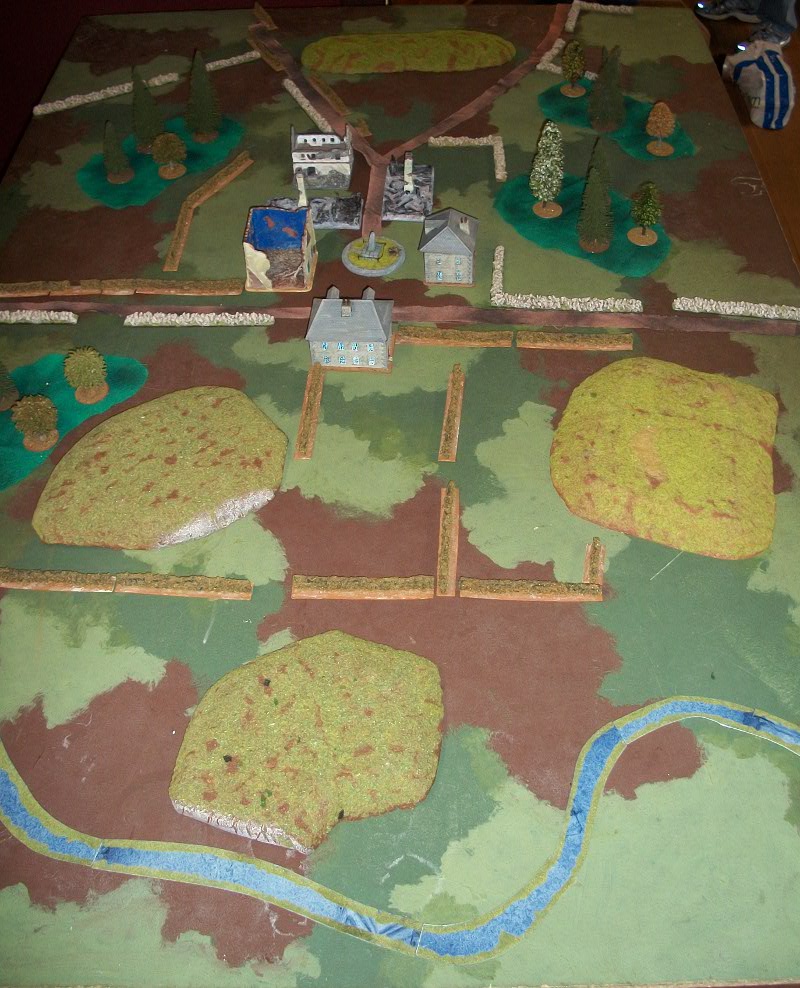 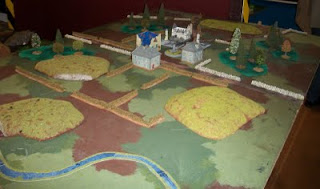 I forgot to ask for army/force shots, ah well...

He deployed the two Grenadier Platoons on-table, though should have at least put on the StuGs in place of one IMO. My Cromwell CO and two Troops massed on the left, 2iC w/Cromwell CS tanks sat on the right objective. Very simply, the left platoons quickly moved forward, MG'd any infantry in sight (only a couple of kills though) and then assaulted on turn 2 putting the opposing platoon under half, though they held.
The 2iC and the CS tanks also went forwards, MG'ing the right-most Grenadier platoon, then assaulting, killing a base but losing one Cromwell CS to a Panzerfaust before being forced to break-off.


Turn 3 and no reserves arrived, while Ian's right-most platoon was now simply shot to pieces, though they managed to contest for turn 3. Turn 4 again saw no reserves for Ian and with nothing near the objective to contest, game over, 6-1.
After the battle we had a chat about which platoons might have been better deployed (i.e. the StuGs on one objective) and the possibility of forming a Kampfgruppe to get to six platoons. From personal experience, I tend to favour deploying my most pivotal/expensive unit on-table, simply because my reserve rolls have been so awful for ages that if I don't, very often that unit does not see action at all. But then, my reserve dice are horrible. Nonetheless, Cromwells are nasty for infantry in a Mobile Battle scenario.

As a Tank Company, I would be attacking. Rudy deployed the Pak 40s in Ambush, the Panthers hull-down on the hill to his centre-left, Panzergrenadiers in the centre and his right, MG platoon on his left and Scouts somewhere at the back.


I used the cover of the hill on my left to deploy my Stuarts, Cromwell HQ and one Troop, Rifle Platoon in the centre, and other Cromwell Troop in the centre hoping to keep the Panthers honest. The Stuarts used their recce move, then another 16" to push far ahead, hopping to draw the PaK 40 ambush or prevent it's deployment. The HQ and Cromwell Troops followed. The Rifle Platoon advanced slowly in the centre trying to draw a little attention while hugging cover. The 2nd Cromwell Troop went forward but were able to stay out of LoS thanks to the buildings to their front.
Despite the Suarts puching forward the PaK 40 were still able to deploy, though a little back. They missed with the first two shots and two Stuarts from the Recce Troop succesfully broke-off out of LOS. Cromwells then moved up and unleashed a hail of fire, but numerous 75mm hits were saved. Return fire killed a Cromwell CS and bailed a Cromwell IV. Panthers moved to their right to KO my 2iC.


With the Panther re-deployment my 2nd Cromwell Troop motored 16" (12" for the Firefly) forward to engage the Panthers in the flank. Two hits were scored, both penetrated, and I rolled...1 and 2 for Firepower. Joy. On the other flank the Cromwells poured fire into the PaK 40s, but all hits were either saved or I failed more 3+ Firepower tests...this is becoming annoying. A single MG hit managed to get through and I rolled a luck '6' to at least kill one PaK 40. Go figure.
The Panthers swiveled turrets to return fire on the flanking 2nd Troop, but only succeeded in KO'ing one Cromwell. The PaK 40 then KO'd my CO (forgot Warrior save though). In response I fired more rounds into the Panthers' flanks, though my shooting was poor and I again failed several firepower tests to result in 1 dead and 2 bailed Panthers. They passed motivation.


On my left the last PaK 40 finally died and I assaulted into the woods, first with Stuarts (lost a tank to a Panzerfaust, then had to break-off) and then with the Cromwell Troop which succeeded in destroying the remaining Panzergrenadiers and their CinC. I consolidated onto the objective. In the German half the Panthers remounted, moved to fire on the contesting Troop but missed. In the following turn (Turn 5) I held the objective with no enemy teams contesting. Despite several burning tanks I had really only lost the CO, 2IC, the Cromwell CS tanks (HQ Platoon). 6-1 to me.


Note to self: when you catch Panthers in the flank, pass your bloody Firepower tests.

Me attacking, though on the same table again...sucks. I put the Rifle Platoon in reserve, Cromwells massed to my left with the intention of over-running his 105mm battery, Stuarts to the centre to keep his infantry honest.


The Cromwells duly swarmed forward, firing at the 105s though gun saves again thwarted my intentions. Return fire bailed a Cromwell CS, though it later remounted and an assault promptly finished off the pinned 105s. I also traded long-range shots with a pair of 57mm ATGs, though again gun saves mean only one died after several turns of firing.
Nick's aircraft (P-47s) make an appearance, but really are just a minor annoyance, claiming one tank only over the course of the battle.
The Recce Troop meanwhile went on a joyride through the town, catching the flank of Nick's Engineers and reducing them almost to half. In the subsequent turn the engineers would have their revenge: pursuing a bit too far, I get assaulted, fail to pin with 11 dice (4 hits) and destroy half the remaining Engineer teams with defensive fire. I then get one Stuart bailed, and stupidly decided to continue with the assault (2 Engineer bases left) and lose another destroyed, the remaining tank breaking-off, then failing its Reluctant motivation test and departing the table. Thankfully, the Engineers also break after seeing the extent of their losses.


In the following turn the Cromwells begin to arrive on the objective to support the newly-arrive Rifle Platoon. With no teams close enough to contest, the following turn sees me hold the objective unopposed (US infantry just an inch too short, should have moved to contest earlier).
I really shouldn't have lost the Recce Troop in this game. Breaking off after losing one tank would have been better, I just got a bit carried away: there were only 2 Engineer bases left, but I happened to miss with my assault rolls. Didn't really impact the game, though I lost a point because of it. Lessoned learned. 5-2 to the Desert Rats.

So 6-1, 6-1 and 5-2 put me in first place. Not that I really cared, but it was great fun using something that wasn't infantry: I've been foot-slogging for a little too long now. The Cromwell & Firefly Troops are awesome, very fast and versatile, but Reluctant can be a pain (obviously). Recce Troop Stuarts always fun. Rifle Platoon never fired a shot in anger over the three games, but given different opponents/missions they would undoubtedly have proved useful.

From memory, the full result was:

Thanks to Nick for organising the competition, and to all my opponents for the games. Hope everyone learned something, I certainly did.