As part of a new-ish project for me, I thought I’d detail how I intend painting my WW2 Hungarian Infantry Company. I started out with the intention of building a Motorised Infantry Company for Mid-War, though the local trend at the moment is to mostly play Late War, thus it needed to be “morphable” to both periods, something Hungarian infantry is particularly good at. All that really needs changing from MW Eastern Front to LW Stalin’s Europe or the Hungarian Infantry PDF is the support weapons, the basic infantry structure and equipment changes only slightly.
The guide below therefore shows collar tabs for the Motorised Infantry: I wish I had gone standard green for the regular infantry divisions now, but I already had a platoon completed with the blue so they stayed. Apart from the small details such as markings, I’m led to believe there is very little difference in appearance between Motorised and Regular infantry. The figure below is from Battlefront's Hungarian infantry range. 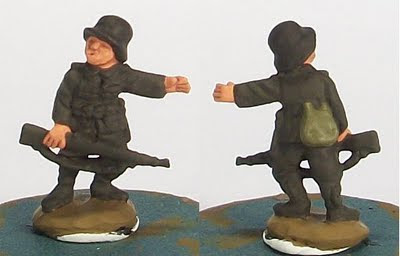 Starting over a black undercoat, I painted VGC Tan over the flesh areas, followed by a VGC Dwarf Flesh block-paint, leaving the Tan in the recesses (eyes, mouth, nose areas, between fingers, etc.). The figure’s bread-bag was painted VPA Canvas, while the rest of the figure was painted VMC USA Olive Drab 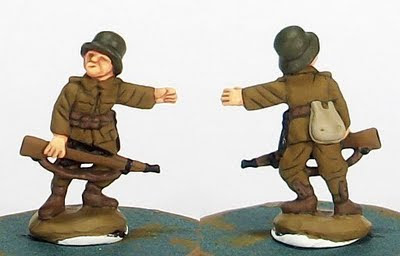 After this had dried (I usually paint a group of figures to the above level, then leave to dry overnight and work on something else) I block-painted the belt, ammo pouches, strap on the rifle and boots with VPA Leather Belt, the uniform with VMC English Uniform, the bread bag with P3 Hammerfall Khaki (any khaki will do).
Wood on the rifle was painted with VMC Flat Earth, metal areas P3 Thamar Black. The helmet was painted with a 1:1 mix of VMC USA Olive Drab and VMC Brown Violet, leaving a line where the rim splays outward and another fine line under the helmet, between the face and helmet. The flesh areas were then highlighted with VGC Elf Flesh, after which the helmet strap (annoying thing) was carefully painted VPA Leather Belt. 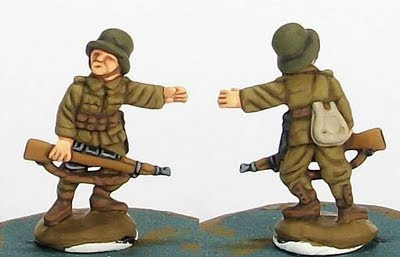 Now highlighting begins in earnest. The leather areas are highlighted with a 1:1 mix of VPA Leather Belt and VMC Light Brown, including the helmet strap which has a fine line painted toward the front of the strap. The helmet was highlighted with VMC Brown Violet, the uniform with VMC Green Brown and the bread bag was highlighted by mixing some white into the khaki previously used. The metal areas were painted VMC German Grey, followed by edge highlights of GW Codex Grey. Wood was highlighted with VPA New Wood.
Painting the M1935 Rifle
Battlefront’s Hungarian infantry range appears to be armed largely with the Mannlicher 35M rifle (to me, as opposed to the later re-chambered 7.92mm version, the 43M), so I painted it as such. The basic detail on the rifle is somewhat obscure: during clean-up I used a blade to cut away certain sections to better define the rifle. Don’t get too carried away with this or you’ll make the rifle too weak. 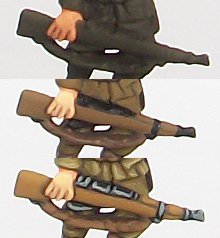 When painting weapons in 15mm I don't try to re-create them exactly, just paint a representation of the weapon emphasising the main elements while ignoring the more minor ones. This simplified approach captures the "feel" of the weapon without the need to go crazy
Now I got a little carried away.
For extra definition on certain areas, I applied edge highlights. Thus on the helmet rim I painted a fine line with a 1:1 mix of VMC Brown Violet and VMC Green Grey (886, not the other one) and a round area on the top of the helmet. The uniform was similarly given some extra highlight for definition, particularly on the edges on prominent folds, etc.., with a 2:1 mix of VMC Green Brown and VMC Buff. The bread bag also received a few extra lines for definitions, painted by adding yet more white in to the lightened-khaki used before. Lastly, the collar tabs were painted with a dark blue, followed by a medium blue as a highlight and to be more visible.
The figures look pretty good close-up, but definitely also "pop" when on the table-top. Adding the extra highlights does take a little longer (of course) but I like the effect. I completed a single platoon some months back but haven't had time to do anymore for ages. Over the next few months I hope to expand the number of painted units until I can field an entire company and support weapons.
All for now.
CdlT
Posted by Chevalier de la Terre at 12:22