AARs, apparently like buses: none, then two come along.

This time would again see the mission Strongpoint Assault played, with two forces chosen from the Fall of the Reich (FOTR) Battlegroup supplement. However, this time I would be defending the strongpoint rather than attacking it.

The Germans would field a Forward HQ; a full Volksgrenadier Platoon (Regulars) with Panzerfausts and MG42s; a Volksgrenadier Foot Patrol (scouts); and 8.8cm Flak (in bunker); a single 120mm mortar; a single Nashorn; a Flakpanzer 38t and a platoon of three StuG G.


The Soviets deployed a mob of T-34s, (3x 85mm, 7x 76mm); a PT-34 with mine-roller; FHQ and a Rifle Platoon; a pair of BA-64s; a pair of 120mm Mortars, and some off-table fire support (timed artillery and airstrike). Five units went into the flank attack, the rest started on-table.


I deployed infantry left and right in trenches, the 120mm mortar to the right-rear, with the Nashorn also on my right and a single StuG on the left. The 88 was in the bunker in the centre with a good field of fire. The rest of the army was in reserve, arriving from turn four. I also rolled a 1 for weather which thanks to rain meant aircraft were grounded: usually good news when you're playing Germans in 1945!


The Soviets, ever masters of "The Plan", appeared to be attempting a double envelopment, though it would later be clear that the main effort would be on their left.


The Soviet left advanced with a splutter and roar of engines as the tanks and armoured cars advanced and the infantry "urah-ed" forward aggressively. Most impressive. 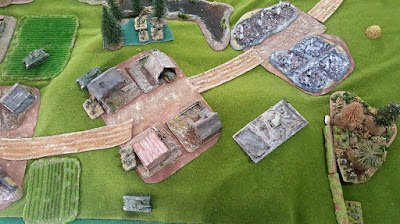 The left Soviet advance was somewhat less impressive as the lead T-34/76 drove into the sights of the Nashorn who (on Ambush Fire) promptly put an 8.8cm round through his front, with predictable results.


The rightmost T-34 attempted to MG the infantry in trenches but took a Panzefaust hit the face which unfortunately only Pinned him. I moved my StuG to take a shot, but missed.

The left advance continued as before as the next T-34 moved into LoS of the Nashorn, fired at him, missed, and was promptly dispatched like his comrade.


The Soviet right saw the T-34 rally, fire at the StuG, and miss, while the StuG fired back and KO'd the T-34. The supporting infantry took a direct hit from my mortar and the survivors were then lit-up by a pair of MG42s to see them off. So far so good. 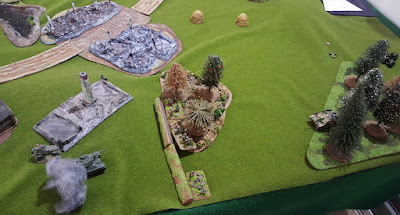 However, it was not all going to be one-sided: Soviet timed artillery landed on the infantry in the trenches in front of the Nashorn, killing a few infantrymen and pinning two squads, but otherwise doing relatively little. A long-range T-34/85 shot then hit the Nashorn before he could get away, putting an end to him. Sad.

Meanwhile my pair of reserve StuGs had arrived and had time to move into position and go onto Ambush fire for good measure. The 88 took some long-range shots but missed with everything.

Turn five: the Soviet flank attack appeared, lead by the PT-34 which was promptly lit-up by StuG on Ambush Fire. Three more T-34s surged on, closing aggressively, hitting the StuG but failing to penetrate the armour, though they did pin him. A solitary Rifle squad accompanied the Soviet tanks, large pom-poms flailing about in support. 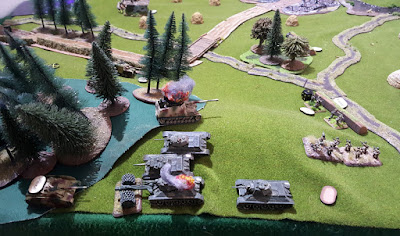 The response saw the StuG rally, the command StuG moved up and KO'd his T-34 counterpart while MG fire pinned the Soviet Rifle squad. Soviet return fire was ineffective as again they hit the StuG and failed to do any damage. However, HE fire from mortars and long-range 85mm shots did destroy two German infantry squads in trenches

Having weathered the return fire, the right-most StuG dispatched a T-34 while a rifle group dispatched another with a Panzerfaust. An MG42 LMG team eviscerated the Soviet Rifle squad and the flank attack was pretty much annihilated.


More long-range fire saw the 88 miss. Everything. Several times. The StuG on the right KO'd the remaining T-34/85 on the Soviet left, as well as a BA-64 who was innocently calling in mortar fire. In return I lost a Rifle group and LMG team to MG fire, but these losses were minor. 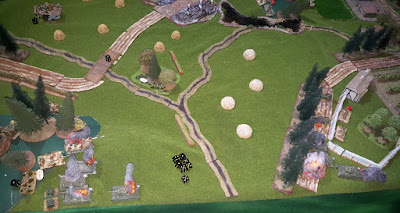 What was left of the Soviet attack switched to their right, the pair of remaining T-34/85s engaging the 88 in the bunker which missed. Them. All. Game. An 85mm HE shot cause a few crew casualties: the 88 gained a Beyond the Call of Duty test, the loader team also sprung into action...and again: They. Missed. With. Everything.

Not to worry, for I had a StuG on my left which moved, fired and knocked out the nearest T-34/85 in one sleek motion. With that Soviet morale broke, while having lost 17/40 BR, the Germans clearly held the field: huzzah!

Rest assured, for their superb performance the StuG crews all received Iron Crosses with Oak Leaves, Diamonds and other very attractive knickknacks. The blind 88 crew were voted "most successful distraction" of the engagement.