I have been remiss in not putting up any Battlegroup AARs lately, despite playing more and more games using the excellent Battlegroup rules. So, here is one of sorts; a bit haphazard but at least I remembered the camera, even if I forgot to take a picture of the overall table.

This would be my first game using a platoon of Panther Ds rather than my usual mix of Panzer IIIs and Panzer IVs (2. Panzer Div). Panther Ds in BG Kursk are rated Unreliable thanks to the numerous teething problems experienced during the first action of the Panther tank. This can be a significant drawback in the game and result in losses related to breakdowns and the like...much like in real life. Funny that. Bring a recovery vehicle...it's why I've just finished my Bergepanther

The mission this time was Strongpoint Assault, the gist of it being: a Soviet strongpoint has been identified and my German battlegroup has been tasked with neutralising it. Up to six units could be used as a flank attack, deploying from the middle edge of a table side I had chosen (secretly) beforehand. The rest would deploy on my short edge and attack from there.

My force would consist of:

I would be facing a (as I would learn) Soviet force with Infantry in trenches, some wire, a minefield, a platoon of Churchills, another of T-34s, three Zis-3 ATGs (one in a concrete bunker), a BA-10, an OP team in log bunker and a pair of 120mm mortars. Half the Soviet force wold start in reserves, beginning to arrive from turn four.

Looking at the table I decided the right was far too obvious a place to attack, so I went left through the village and indicated the flank march to come in on the same flank. In reserve went a Panther, the Flammpanzer III (first game too!), an LMG team and three Rifle groups. 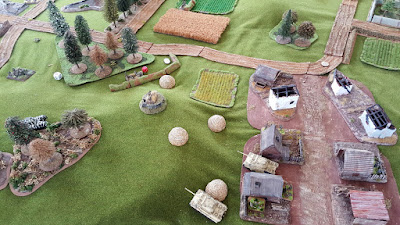 For the first couple of turns I pushed up quite aggressively, losing a 3-man LMG team to a Soviet bombardment on the road just outside the village. In response, my 15cm Infantry gun managed a couple of direct hits on a Soviet Rifle squad near the crossroads, causing five casualties. 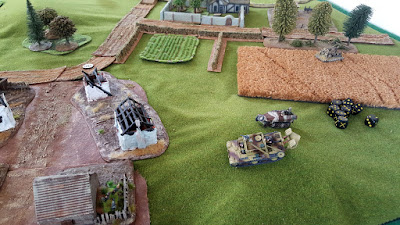 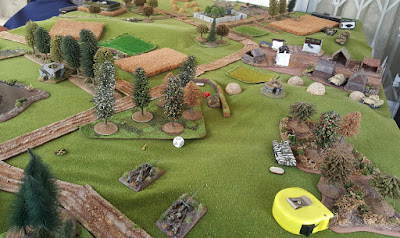 The right flank was held only by a recce group with a Sd Kfz 250 in the meantime. 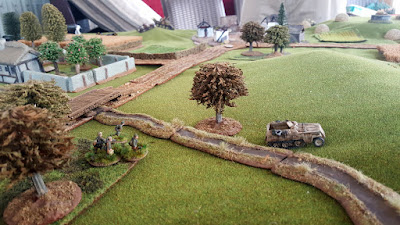 A foolhardy Churchill then attempted a close-range shot on a Panther, missed, and was brewed in return. More Mg fire failed to have any effect on the remaining three men of the nearby Soviet rifle squad. I did, however, manage to clear the Soviet Observer team at the cost of a casualty...by shooting as it turns out, as the initial assault caused only a single loss! 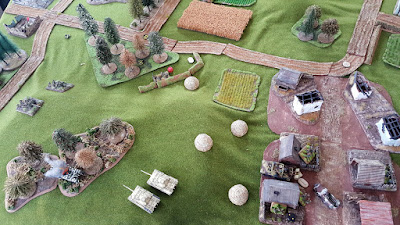 However, it was not all one-sided as a 120mm mortar barrage hit both Panthers and KO'd one with a direct hit. Joy. My attack started to slow considerably as no reserves showed up on Turns 3-5 and I struggled for orders.

Reserves finally arrived on the table which, with some orders, meant I could get going again. However, Soviet reserves in the form of a couple more Churchills, three T-34s and some more infantry were also arriving. 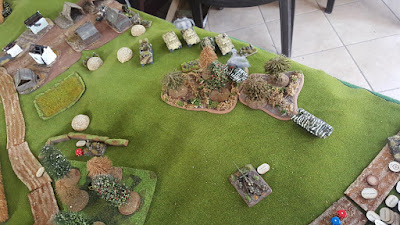 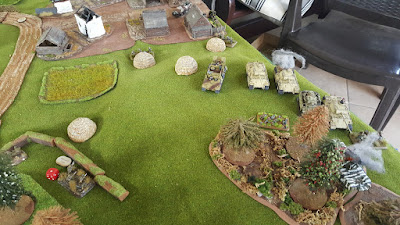 Two turns of poor orders earlier mean I had not got past the wood, and my narrow attack was now being faced down by considerable reinforcements, waiting for me to make the ext move. The wood that was supposed to provide cover was now a severe constraint to my line of sight and movement. 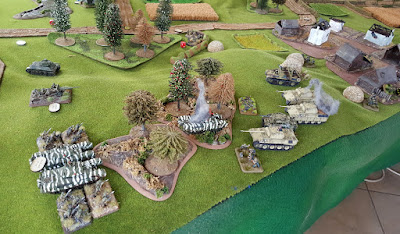 What to do? Attack! Both Panthers surged forward, saw 6-pounder rounds from the Churchill (on Ambush Fire) bounce off harmlessly, and KO'd both Churchills. The Flammpanzer also made a contribution, killing 6/8 of the first Soviet rifle squad targeted. A stray 15cm round from the infantry gun also managed to land on top of the Soviet Platoon Commander, removing him from the game. That's more like it. 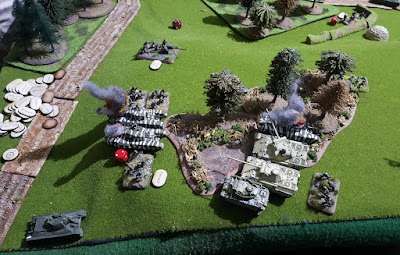 In response the T-34s used their speed to outflank the Panthers, one going far wide down the road in the centre of the table, the other missing a close-range shot on a Panther's flank. The last T-34 hit the Flammpanzer III and though it failed to penetrate the armour, the German crew were none too happy (pinned).

In return I stayed stationary and...missed with everything! The flanking T-34 then hit both Panthers in the flank, but only succeeded in pinning one! Horrible dice on both sides. The T-34 driving wide on the road then turned inward to engage and hit the pinned Panther, finally managing the penetrate the side armour and destroy it. 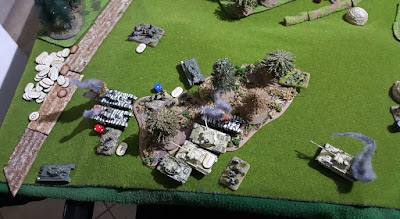 Down to one proper tank and knowing the Soviet force had pulled quite a few chits, I knew I had to force matters to a head quickly as one Panther vs. three T-34s was not going to end well for me.

The Flammpanzer succeeded in spotting the (would-be-tank-hunter) Soviet rifle squad and annihilated them with a flame burst (ten hits from ten shots!). The Command Panther succeeded in destroying the T-34 to his right front, but several attempted infantry close assaults against the rear-most T-34 failed to launch or did no damage. More failed spotting rolls (five 1s and a 2) saw the German LMGs and half-track do absolutely nothing as all failed to spot the remaining three Soviet infantrymen I had been trying to break from the first turn, or anything else. I guess a T-34 driving through your rear is somewhat of a distraction...

To replace the joyriding T-34, the Soviets sent a BA-10 down the road, again looking to exploit a weak rear area. In response I only had the 15cm infantry gun to engage it directly, over open sights, but the dice gods smiled: I rolled a pair of sixes to hit and the BA-10 disintegrated. Soviet morale broke and the Germans, very narrowly, held the field.


Another turn would probably have resulted in the destruction of the last Panther, and my desire to see what the Flammpanzer could do was shown to be a poor choice in this particular game: I lacked an ATG or say a Panzer III to cover the flank of my Panthers and it cost me dearly. I suspected it would, but having never use a flamethrower of any sort I was keen to see what they could do: flamethrowers are extremely potent against infantry. Shoot them first!