Someone asked me to explain a few months back (by e-mail) how I was painting splinter camo on 15mm figures. So a few pics & text = short tutorial of sorts. I might as well post it here too.

Painting Splinter camouflage on 15mm figures can be quite challenging but, with a little practice, is not nearly as difficult as it would appear. The way I paint it has been fairly similar for a few years now: the design painted on General von Sauken is very similar to that on the Volksgrenadiers, for example. I say "Heer" Splinter ("Splinter A") as I tend to paint the Luftwaffe variant ("Splinter B") a little differently. But that is just a personal choice: the pattern below is perfectly fine for Luftwaffe Splinter since on a 15mm figure we are not really painting actual Splinter camouflage, but rather a representation thereof.


A simple way to paint basic Splinter camouflage is shown by Evan Allen on the main Battlefront/Flames of War site. This was the method I used some years back on my old Luftwaffe Jaeger Platoon. It is fairly easy to do and does a pretty good job of representing the camouflage. Of course, I've improved a little since then, so I started looking for something a bit more involved. The Battlefront guide in the Art of War II (p. 27) had a decent guide, and the way I do it is pretty much based on that.


I'll be using (mostly) the Panzer Aces Splinter colours as they are nice and bright, something needed on small 15mm models: darker colours stand out less, making the camouflage that much more difficult to see. Dodgy pics as standard...

I start with a coat of P3 Cryx Bane Highlight as a shadow for the Splinter Base. A mix of VPA Splinter Base + a little Field Grey works well too. (As an alternate, as I used on the Volksgrenadiers, is a shadow of VMC Khaki and a base colour of VMC Stone Grey: this is a somewhat "warmer" base, but the end result is also very good.)

After that, I block-paint with VPA Splinter Base. I tend to leave only a few shadow lines; leaving too many will make them visible later which will add more "noise" to the pattern. Just a few lines for definition works fine. 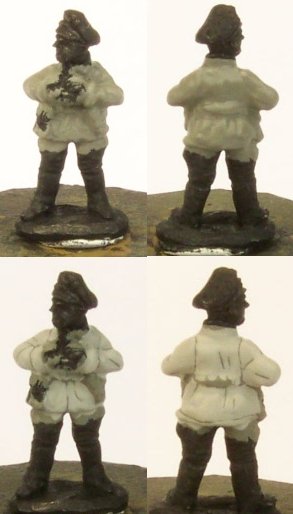 After the base colour is done, I paint in brown camo lines with the VPA Splinter Brown colour. VMC German Camo Medium Brown is very similar and I have used this as well many times. Since we are not painting the actual thing, I try to suggest what the camouflage should look like. Keeping the lines/edges as straight as possible helps in this regard. I also initially paint over the belt, etc. trying to keep the pattern "coherent": the belt and other equipment details are picked out later.

That being done, I add in the green splotches with VPA Splinter Green. Placing these so they look "correct" is still something I have difficulty with: looking at the real thing only helps so much. Again, I try to keep the edges of the patches as straight as possible, and not to add too much green.

Lastly, I paint fine lines (aka "Splinters") in groups of 2-3 lines on areas where the base colour is showing through. I used Panzer Aces 348 "Splinter Strips" here, but any sort of dark-to-medium green-grey will work just as well since the lines are very fine. This is not strictly necessary, and of course is well out of scale, but I like the effect. Remember to keep the lines in one direction, as on the real thing.

After that, the rest of the figure was completed. 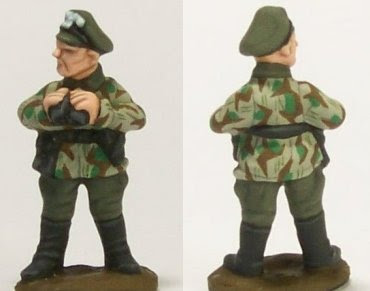 For figures wearing helmet covers, the process is much the same. The helmet covers were made from several pieces of camouflaged fabric sewn together, but I tend to ignore this fact in this scale and just paint. However, I add the splinter lines at different angles to suggest different pieces, plus it just looks better.

On the figures above, you can see the difference between the Splinter Base used on the two figures on the left and the warmer tones of VMC Stone Grey (over Khaki) used on the right. Both variations can be used in the same force without difficulty. Adding darker base colours can also add variation, although from 3 feet away the difference will be minimal.