A bit of an oddity as far as detail and equipment go. These are meant to represent, as far as I can make out, troops from 1st Battalion, the Rifle Brigade, in late 1944 or early 1945 where several pictures show the infantry wearing GS (General Service) caps,  a large, floppy beret-like piece of headgear, even in combat conditions. Despite some misgivings, I thought I'd at least give the figures a try: mine are painted as a platoon from the 1st/5th Queens Rifle Battalion. Seth Nash sculpts and these, along with the Panzer Division Lehr infantry, are among the best he did for Battlefront. 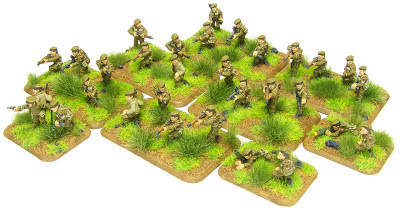 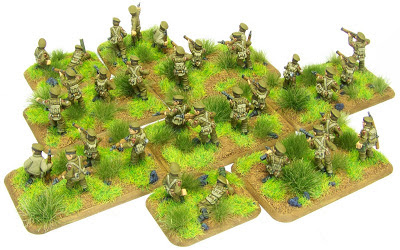 Infantry from the 7th Armoured Division, like most others, are most often seen in steel helmets, particularly where combat is expected. I think these are mean to represent men from the 1st Battalion, the Rifle Brigade, as they appear in some pictures in 1945. 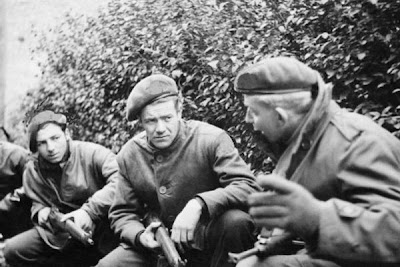 Despite some initial misgivings, I wanted to see what the figures were like and how they would paint up. The detail is generally good, less exaggerated folds than the standard LW British infantry, good crisp details on the webbing and packs (a few enamelled mugs even present!), better than Battlefront's standard LW infantry. The canteen is a little small and missing a strap but otherwise all right, entrenching tool very crisp. Rifles are a little odd: a mix of Lee-Enfield No. 4 Mk. I and No. 1 Mk III...very odd for Normandy, I think they should all be No. 4s. Stens and Brens present too, good detail on them. The odd figure in a jersey is a nice touch and two very good officer poses in the blister, only one pictured here though. 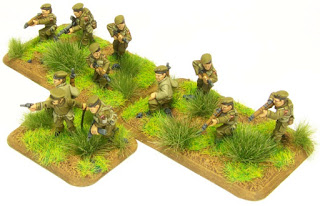 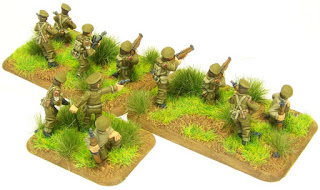 Otherwise, the poses are a little stiff, a few look simply awkward. Mostly robust sculpts with strong weapons and ankles though, necessary when you want to file down Battlefront's awful thick bases without snapping figure off at the ankles. 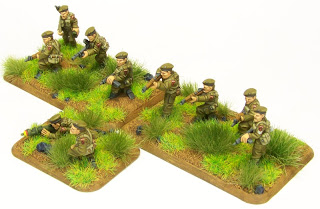 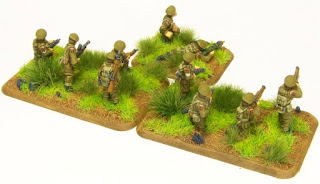 I painted these largely with my standard British colour, using Panzer Aces English Tankcrew and Highlight for the uniform. Cap badges on the GS Caps and Regimental and Divisional flashes suggested for a bit of colour: nice flat sleeves to paint some NCO markings on as well, so added a few of those too. 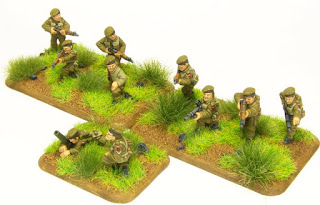 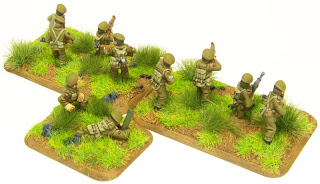 Not the best range of figures Battlefront has produced by any mean. However, despite their obvious flaws, I can't help but like the figures: in their favour, they are study, robust, and well-detailed with decent, natural folds on the clothing. They have issues, but when painted up they look pretty good. This platoon has already preformed sterling service in many games supporting the armour, so that may well account for my like of them!