Unfortunately the average standard of terrain declined from last year, something which I was not pleased to see. Too many open tables, not enough linear terrain and LOS blocks: no wonder heavy armour is so popular currently, the terrain encourages it. Much work to be done on that front by several players.

(Note: lighting in the halls was not particularly good, so the pictures were taken mostly with a flash with an already dogey camera. Also, I almost constantly have to walk around answering rules queries, so my picture taking is intermittent and there are gaps in the turn sequence.) 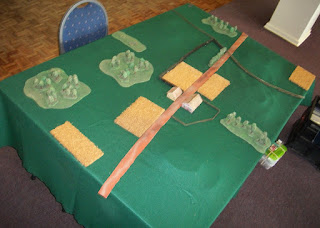 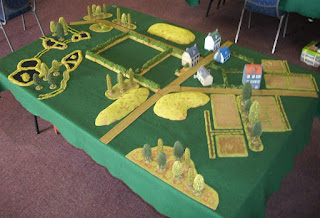 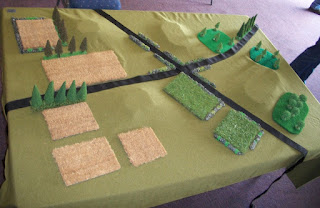 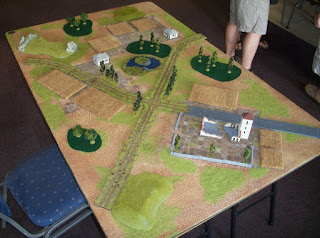 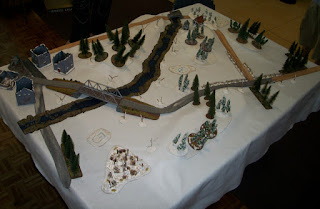 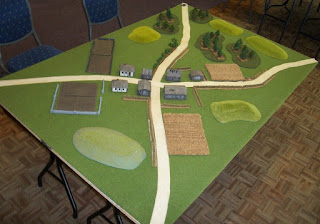 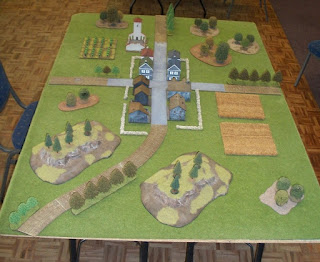 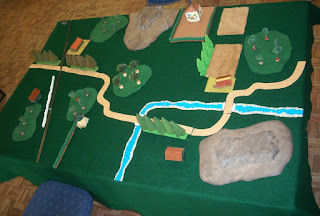 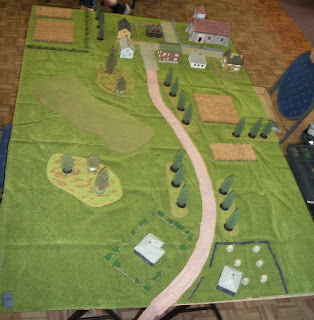 I somehow missed getting a shot of the best table, though you can see pictures of it in my Game 3 below.

Missions were random from several pre-selected, they ended up being (Day 1) Free-for-All, No Retreat, Hold the Line, (Day 2) Cauldron and Breakthrough.

In the first game I was drawn again one of the guys from Mpumalunga I had not met before, Sean Barry. Sean was running German Grenadiers out of V3 Forces, something like:

No Army shot. The first mission was...Free-for-All, a mission I absolutely detest, and to make matters worse I was drawn on one of the crappy tables, this: 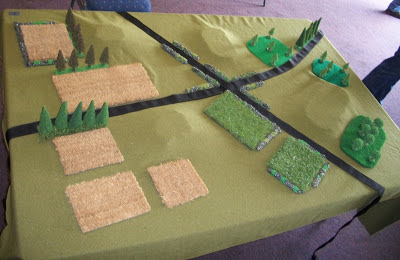 I deployed on the far edge, Crocs, Rifles, Achilles and Carriers to the left, Shermans in the centre behind the hill, Rifles to the right.  I aimed to attack up the left of the picture, hold in the centre and right.

Sean deployed his 15cm Battery to the right behind the wood, a Grenadier platoon in front of them. Stugs aimed to go down the middle of the table, the pair of Tigers were hull-down on the centre-left hill. Mortars somewhere at the back, then Grens and Pioneers on his left.

My attack started badly as, despite spreading out and killing several observers in the first turn, one observer from the 15cm battery survived and killed a Croc: the 2nd died in turn 2. Yay. This would be the beginning of me failing to pass even a single armour save the entire game. I pushed on with Rifles with RAMs and Carriers. Achilles and Fireflies hit both Tigers...bailed both. Carriers gunned-down nearly half the Pioneers who steadfastly refused to dig-in the entire game.

In the next few turns I steadily lost troops and killed little: the Achilles continued to bail StuGs and Tigers before dying in return fire: AT15 is great but when I could only roll 2s for Firepower, it didn't help. The CAR Shermans also bailed a Tiger and a couple of StuGs...all got back in, I couldn't pass a single firepower test; it got old really fast. Shermans lost 2 bailed, thankfully Sean managed to fail the pair of Firepower test too, the only ones in the entire game he failed.

Going for broke, I used the Carriers to assault and kill the last 15cm Battery observer (far left of the table) and pin the Grenadiers. My right infantry platoon then managed to get up into assault with a mix of Grenadiers and (the now somewhat reduced) Pioneers. 7 veteran skill checks later and I hit with ONE, lost a few teams in the counterattack, came back with 4, again hit ONE...had to break off and then the platoon ran away. Not good. The Pioneers managed to fail morale but the Grenadiers were still in OK shape On my left an adventurous Grenadier platoon was stopped cold thanks to the Rifles and their RAMs, though the StuGs managed to kill 2 RAMs in the process


In game like this I know the dice turn, eventually, it was just a question of would they turn while still had something left to fight with?

CAR to the rescue (no pics though). Re-rolls to mount up saw them all get back in, they found their gun sights (at last) and slotted 1 Tiger and KO'd the StuGs as I started rolling 3s for Fp. They then went Tiger hunting and killed the last one while the Carriers (one dead from an 8cm mortar shot...grrrr) shot back an assault by the Grenadiers on my left, killing a few in the process. The Grenadiers then ran away, taking the CinC with them and with that Sean failed Company Morale (4 dead platoons, 3 fighting).

So, 4-3 to me. Not a great start, I probably played to aggressively too early, but dice did not help. Most of the FFA games resulted in "draws" though, which would help me later in the scoring. Too many people playing too cautiously, so maybe just as well I attacked early even though I ended up taking very heavy losses.

David is a very young player with a sound grasp of the rules (better than most adults at the competition) and some skill at the game: in a few years and some more experience I think he will definitely be a force to be reckoned with.

David was fielding a SS-Wiking Panzerkompanie out of Grey Wolf, something like:


As an Always Attack force, I would be attacking in HtL on this table, from the far side towards the near. "My objective was placed in the second crop field on the right, his was on the centre hill at the back. 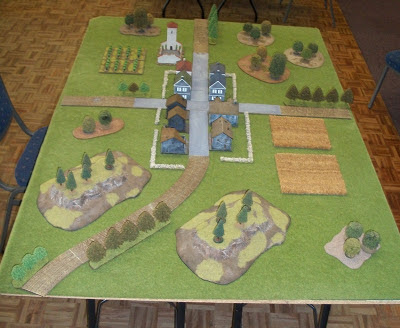 I deployed heavily to my left, Crocs, Achilles, CAR Shermans and Carriers. Both infantry platoons were tasked with moving up the centre through the town to secure the flank of the advance. The plan was for one Rifle platoon to sweep left as needed to help clear the objective which would be hammered by the Crocs. The Achilles and CAR Shermans would provide overwatch and put fire onto any tanks attempting to interfere.


David was not convinced I could attack a tank company and said as much: he deployed his Panzergrenadiers on the forward objective, then put his Panther platoon and the 2 PaK 40s in ambush.


Things went according to plan, mostly. The Carriers forced any ambush back, Crocs advanced and smoked Panthers after the Achilles had landed a couple of hits (one bounced, another failed Fp...). The Rifles advanced from building to building in the centre. 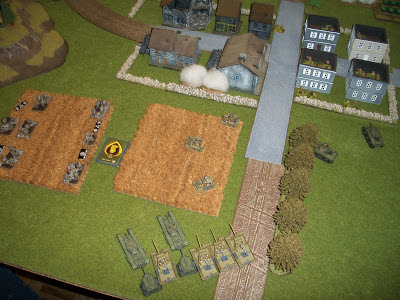 David's Panthers ambushed on my right which suited me fine, though he lacked cover close enough on the other flank which was not shut down by the Carriers. The Panthers missed and my CAR Shermans were in a prime position to punish them.


In a poor position, David realised his mistake with the Panther ambush, but to his credit he tried to make it work and get a platoon kill. The 2iC Panther bogged and was captured by advancing Rifles, the Achilles finished off the CinC Panther and a Croc burnt a hole in the Panzergrenadiers' position making them run. My stationary CAR Fireflies then missed 4 out of 4 shots (joy) on a Trained Panther at close range and the platoon died at the hands of a moving Panther Platoon and Panzer Ace. I shouldn't have bothered engaging here, but sometimes the temptation is too great.


With just PaK 40s left to contest and one Croc still with Flame Fuel, David conceded. 5-2 to me. We had a good chat afterwards about army construction (didn't like the PaK 40s and AA in his list) and being put on the defensive as a tank company. A very bright kid who can only get better.


Game 3: No Retreat vs JC Winterbach

JC was fielding Armoured Panzergrenadiers out of Grey Wolf and was similarly not expecting to be placed on the defensive. He had something like:

I got to play on one of "my" tables, probably the best at the event. Most of the combat would occur over the forward objective placed on a large hill in the centre-left. 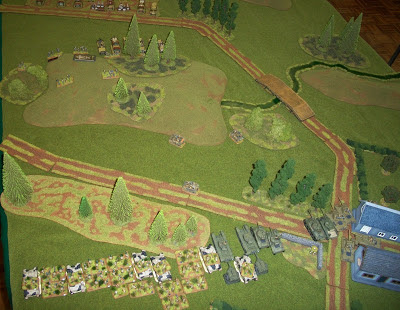 I deployed both Rifle Platoons to the left, then Crocs, Carriers, CAR Shermans and Achilles to the right flank. I pretty much aimed to use the two small patches of woods on the right and scrub on the left as cover for the Rifles while the Crocs reduced all those MGs teams to a point where I could take the objective.

JC deployed one Armoured Panzergrenadier Platoon on the forward objective, one on the rear and the Panthers in ambush. 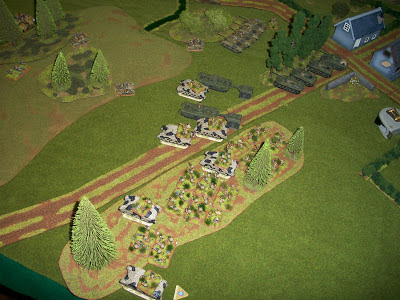 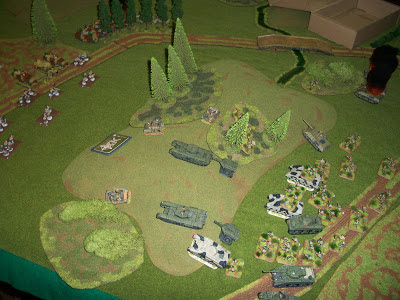 The entire lot ground forward, the Carriers gunned-down some infantry JC tried to move to better positions and a single Croc flamed four teams to force a platoon morale test which they failed. The Panthers ambushed the behind a tree line at the back and hit nothing. I returned fire with the Achilles and a Firefly, managed a few penetrations but again rolled a couple of 2s leaving only one dead and two bailed. Return fire KO'd 2 Achilles, another was lost to a Nebelwerfer bombardment (came on first turn) and I pulled the survivor back behind the hill for cover. He later helped kill-off the Panzerspah. 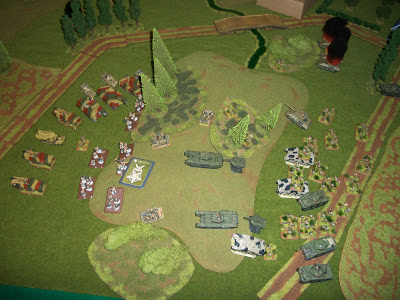 JC moved his second Panzergrenadier platoon up to assault, laid down smoke, and came in. With 15 dice I only managed 2 hits and lost 2 Carriers before breaking off. MG fire whittled the infantry down in the succeeding turns, I kept the flame for the final push as in the consolidation he had spread out as much as possible.

By now the CAR Shermans had come around the hill, the Fireflies continued to miss/bail Panthers, but a 75mm flank shot took care of one Panther and the following turn a flanking Croc (!) KO'd another while the Croc with flame destroyed the remaining infantry: the Platoon CO and attached Stummel broke. The Panthers also ran, even with a re-roll, which left just von Sauken to move to contest. 4 Platoons down meant company morale which was failed and that was pretty much the game, 6-1 to me.


So, I ended Day 1 with 3 wins, 4-3, 5-2 and 6-1. I lost a platoon or two needlessly over the course of the day but for an army I was playing for the first time, things were going surprisingly well even if I wasn't playing particularly well.