The Flames of War US Tank warrior from Cobra or Turning Tide, Staff Sergeant Lafayette Pool. Unlike all too many FOW "Warriors", Pool actually existed and had a distinguished career.

Pool served in 'I' Company, 32nd Armored Regiment, US 3rd Armored Division, serving from 1941 to 1944. As part of the 'Spearhead' he saw combat in France, Belgium and German, leading 21 full-scale attacks during some 81 days of combat service. He and his crew were credited with destroying some 258 enemy vehicles, including 12 tanks, as well as accounting for over 1,000 enemy personnel and capturing more than 250 prisoners. During his career he was twice-recommended for the US Congressional Medal of Honor, though never awarded. He was however awarded the Distinguished Service Cross, the Legion of Merit, the Silver Star and the Purple Heart, as well as the Belgian and French Légion d'honneur.

Pool served in three different Sherman tanks, the first being a 75mm-armed M4A1 Sherman, the second and third being up-gunned M4A1 (76)W, as depicted here. All his tanks were named 'In The Mood', the first and third vehicles were KO'd by enemy action, the second by USAAF P-38s mistaking US tanks for German. Serving in the third M4A1 76mm near Stolberg, Germany, on September 19, 1944, 'In The Mood' (No. 3) was hit by German fire and Pool was severely wounded, later losing a leg. A good summary of Pool's tanks can be fond HERE.

In 1948, now with a prosthesis, Pool rejoined the US Army to train the next-generation of US tankers, serving in the Korean War and until 1960 when he retired at the rank of Chief Warrant Officer 2. Pool died on June 1, 1991 at the age of 71 and is buried at the military cemetery of Fort Sam Houstan in Texas

(Taken mostly from the 3rd Armored Division Site, Pool index HERE, and a few other sources. Sources may differ as to numbers, though I've gone with those from the 3rd AD site.) 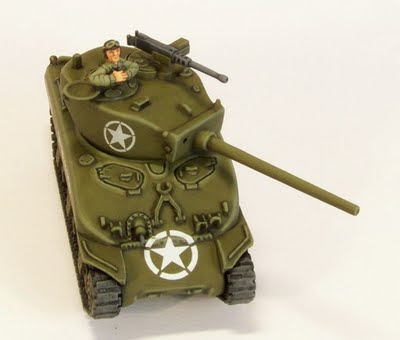 Battlefront sells Pool in an M4A1 76mm version, and in game terms this usually makes the most sense. I've done this model to match with the previous 76mm Shermans I've done, but added the name 'In The Mood' to the sides of the hull. It's much larger than the real name was and done free-hand (with many touch-ups!) as I didn't have any suitable decals, but it looks alright I think. Front star decal and serial numbers are from BF, turret stars with broken circular surround by Dom's Decals
...and my attempts. 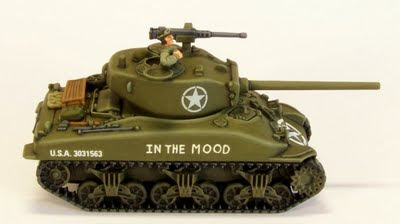 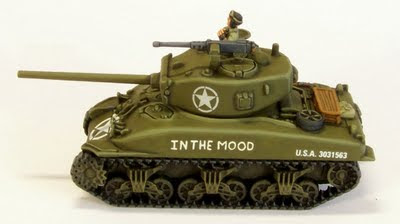 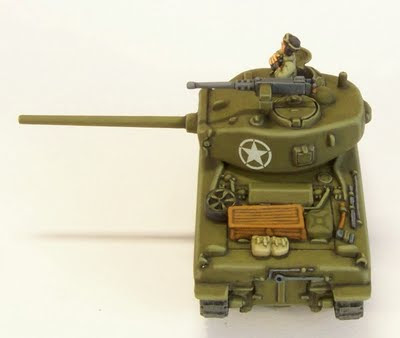 The rest of the tank I kept fairly uncluttered as I much prefer clean lines, so no extra track-links, etc., and limited stowage.
To me, Lafayette Pool exemplifies the spirit of the US Armored Division during WWII. Reading the exploits of individuals such as Pool and others who go largely unnamed, one can only be inspired by what they achieved. Battling against hardened opposition they succeeded in spite of the German's superior armoured vehicles: their stories should be required reading for all "panzer fanboi's". The accomplishments  of likes of Barkmann and Whittmann sitting behind 4+ inches of armour and superbly armed might be impressive, but they simply don't compare in my mind with the likes of S/Sgt Lafayette Pool, Tpr Joe Ekins, Lt. G. K Henry, Sgt W. Harris, and so many others who fought without such luxuries
CdlT
Posted by Chevalier de la Terre at 12:57